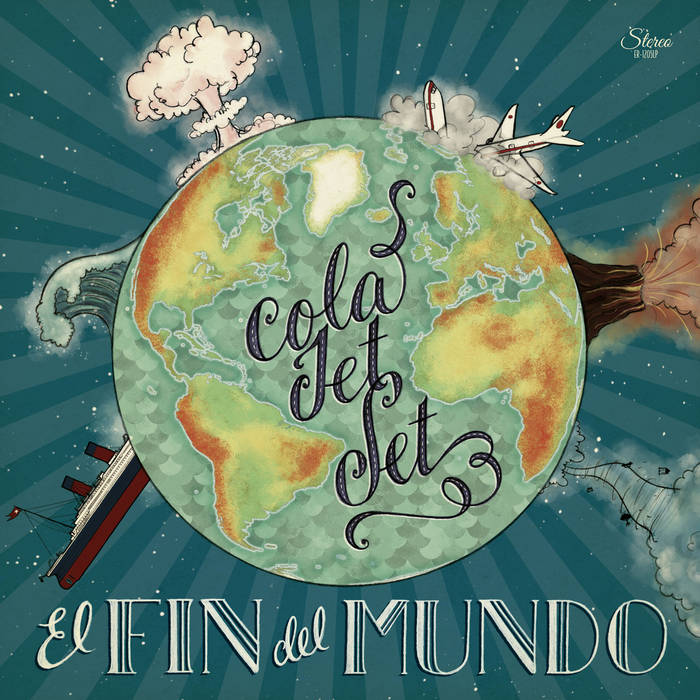 It has been a while since we heard any news from them, but they are finally back. They are returning with a few changes in the line-up, and more importantly with a new collection of great pop songs. These are timeless, catchy songs, full of exciting stories and eternal melodies.

All this time, on top of very carefully and lovingly preparing this new album, they have been busy with so many other professional and personal things - especially Felipe, who has been touring non-stop around Spain and Mexico with the triumphant return of LOS FRESONES REBELDES. They began recording the album in 2013 and in this period of time, Ana, Cristina and Joan Pernil have left the group, and other musicians have temporarily formed part of it, like Estel and Anna. But now Felipe is back, and this time Alícia is in charge of the lead vocals, so the current COLA JET SET line-up is Alícia on vocals and guitar, Dani on bass, Felipe on solo guitar and 12-string, Manel on keyboards, Matt on guitar, Ruth on backing vocals and percussion, Toni on drums and Gerard Civat participating as a producer and on backing keyboards.

And even though that and so many other things have happened in these last few months, the group from Barcelona is still just as fresh, their spirit is just as adolescent, and their sensibilities are just as pop. This new album shows it all very clearly, aiming perfectly for immediate hits. The album opens in style with “Fin Del Mundo”, a show of punk-pop with a sixties touch and marvelous plays on the vocals, which will become one of the distinguishing marks of this album. Is it a magical formula? As if anyone would ever even think that there were formulas here? “Nada, Nada, Nada” is a little calmer but it maintains that timeless tone that we are going to be hearing for the duration of the album, and it has a heaviness in the lyrics which talk about losing everything, in contrast with the playful arrangements and catchy main melody. “No Te Enamores De Mí” is a delicious cocktail of soft-soul, Brazilian pop, and lounge music. “Me Levantaré” is a punk anthem, raging and reactive, full of energy and punch. It has enough strength to keep going forever. “Aunque Sea Mentira” gets back to the mid-tempos, but it does so with exciting lyrics, and acoustic arrangements à la BELLE & SEBASTIAN. The song was written by Manel, and it has a chorus that makes you shiver: “Tengo que confesarte / Que por mi parte siempre he buscado / Algo de ti en los demás” (I have to confess / that really I have always looked / for a piece of you in everyone else). “Dosifícate” closes the A-side with the freshness of LA BUENA VIDA’s and LE MANS’ early songs, with those omnipresent basses, but sped up a bit in their style, and with a chorus that has a breath of soul, falsetto and all.

“Sábado” opens the second side, with the day of the week that is most deserving of songs. It is a new dose of electricity and punk spirit, force, and a show of power. C86, STEREOLAB, Kraut-rock, and a lot of noise... “Canadá” goes back to the sweetest pop from Alícia and echoes of Scotland and groups like ASTRID and AZTEC CAMERA, with melancholic lyrics about love separated by distance and Rosa Martín’s caressing strings. “Seguro De Felicidad” is one of the last marks Ana left on the group. The song has a lot to do with the soul-pop of Diana Ross and her SUPREMES - colorful, optimistic, vital, but still delicate and fragile. “Ahora Te Quiero Más” takes us straight to the Spanish pop tradition of the sixties, with those impossible harmonies, the soul and the pop influences, and that Castillian tone. It would fit in just fine with the repertoire of LOS BRAVOS or LOS BRINCOS. The pop winds are blowing from so many different directions, but COLA JET SET seem to know perfectly how to handle them all, letting themselves be blown around at their will. Fantastic. “Centro De La Tierra” is a pop wonder - fragile, with angelic harmonies and guitar arrangements that could be found on a THE GO-BETWEENS album. And to wrap things up, it’s “Lo Mejor Está Por Llegar” - a pure Ramonian punk finale, an unbeatable way of closing “El Fin Del Mundo”, with a sure shot in the center of the bulls-eye.

It is clear that COLA JET SET have only been enriched by their various line-up changes, while still maintaining an unwavering pop militancy with a clear dedication to the music. And it is more than obvious that the group from Barcelona has one thing straight: they want to make us dance, jump, and sing, and to excite us with this great collection of songs.